The Bonds That Carry Us

On Friday evening, the week before school was out in May, we all collected at our house for dinner. I’d been craving the company of our grown children and grandchildren, everyone at the same time, just the ten of us. I didn’t have time to cook that day, so I ordered pizza from the new place around the corner and made a big salad. It was just right. No fuss. Easy is not my usual style when it comes to family dinners, but I’m learning to appreciate the option.

What matters most is to be at the same table, doing what families do—having a meal together, playing a game afterward, or watching the young ones dance. Those times are pure comfort and delight. My happy place.

Along with my desire to catch up, we had things to celebrate. I wanted to raise our glasses of wine and water and Blood Orange San Pellegrino to mark the occasions. We toasted the closing date for Sam and Ruby and the kids’ new home. To honor the grandchildren, we clinked our glasses to their excellent school performances, a freshman year of high school almost complete, a stellar end-of-year project involving a helicopter ride and an interview with the pilot, a citizenship award for being kind and helpful, and one grandson’s advancement from 8thgrade to high school.  Somewhere in the mix, we raised a glass to our 44thwedding anniversary, which was coming the next day.

Chuck and I have celebrated anniversaries in all the usual ways, with dinners in restaurants and day-long play dates, but every now and then it’s been more communal. I like when that happens. It’s a good reminder that marriage is lived in a context, and our lives are joined to others.

When Molly and Sam were little, they invited us to a “somewhat formal” dinner at our kitchen table in Sacramento. They served spaghetti, brownies, and water. It was a perfect meal! Years later, after Molly was married, she and Mark gave us a surprise party for our 25th. The invitation began: “Come join with us and celebrate the miracle of God’s providence and grace…” They were young, but they already knew that grace was the main ingredient for marriage. They also knew that the bonds we have with others are what help carry us through.

In the summer of 2017, when our marriage was in a terrible state of confusion, I often went to visit my mother-in-law in her memory care home. She was in the last stages of Lewy Body Dementia and could no longer speak coherently. Yet, even as her mind and body were ravaged by disease, her presence was a comfort. I’d sit beside her bed with my hand on her bony hip, and feel immediately connected to our history, to the people and places and stories to which Chuck and I belong. She brought me back to our real story, the one that trumped the strange moment we were in. Every time I was with her, it was the same.

I met Mom one late afternoon when I was 15 years old. Chuck and I’d been swimming at the irrigation canal, about a mile through the orchards from his neighborhood in Tierra Buena near our hometown of Yuba City.  We dropped by the house on our bikes to tell her he was riding home with me. I was rummy from my first taste of Strawberry Hill wine, feeling awkward and shy, so I stayed on my bike at the edge of the lawn. Mom waved to me from the doorway.

When I became her daughter-in-law, some of my ideas were hard for her to accept. I was a woman of my time, and my times were different than hers. She was downright offended when I kept my own last name and didn’t become an Ashworth until later. But even as the years went by and we had more in common, there were things about each of us that were challenging to the other.

When Mom traveled from California to Nashville for a visit, she wanted to make up for lost time with us, so she hovered, especially with me because I was the most accessible. I worked from home and had an office in the house. Chuck’s studio was connected to the house as well, but she didn’t go out there very much, only to greet people and give hugs, then she’d come right back. I wanted her to be more independent, to see that I needed space to breathe. I was an introvert, already living inside of a hospitality ministry. I felt suffocated by her constant company, but I was never brave enough to tell her. I was afraid of emotional unpredictability, of hurt feelings and tearful outbursts. I didn’t want a scene, so I held it in and became unhealthier by the day. Things would have been so much better if I’d told her what I needed and let the chips fall. We would have been okay eventually, and maybe even sooner. I’ll never know.

Regardless of what was difficult, we had a deep love for each other. She loved me as a daughter. She was one of my greatest cheerleaders. As I discovered my gifts and stepped into them, she was proud of me. She prayed. I remember her saying, “I think it pleases the Lord when I talk to him about my children and grandchildren.”

There were so many things I admired about her.  She was an incredible grandmother and an equally beautiful great-grandmother. In fact, she thought every member of her family, from one side of the country to the other, was special and worthy of her bragging rights. She was everyone’s champion. You didn’t have to be a blood relative or marry into the family for her to feel that way. Whoever needed a mother or grandmother or aunt had a place with her.

In the Nashville family, we joked about the two hours it took to have a phone call with Mom. The first hour was for telling her about our life and our expanding families. The second was for her to tell us about her life and the family in Yuba City. She kept us all connected, spreading the news around. The phone call was hard because it went on for so long. It was also a gift of attentiveness. Mothers and grandmothers are notorious for wanting to know the details, and I loved telling her ours. She was interested in every little thing. When she stopped asking about our lives, my sister-in-law, Terri, and I would talk about how strange it was. Why doesn’t she ask about our families anymore? Later we knew it was an early sign of dementia.

For the last few years of her life, Mom lived in Nashville, mostly with Terri and her husband, Doug, and then in memory care for the final chapter. During the last week of August in 2017, she began transitioning towards death. Family members from California, South Carolina, and Nashville gathered in her room. We lay next to her on the bed and sat wherever we could find a place, talking and reminiscing, holding her hand. We kept vigil, even Sam and Ruby, who were getting married later in the week. Terri and Aunt Karoly, Mom’s sister, stayed each night. When it was time to turn to the joy of the wedding, Mom was still lingering. She had no words left and didn’t show any signs of knowing we were there, but the hospice nurse told us she probably didn’t want to leave the party. That was more than likely true. She loved having everyone around her, listening to the conversations, and feeling a part of things. At last, the morning after Sam and Ruby were married, she died.

We couldn’t help but wonder if she’d waited until her grandson was in good hands before breathing her last. I don’t know if it’s possible to have that much power over the moment of one’s death, but inside the sovereignty and kindness of God, I wouldn’t put it past her.

A few months ago, we were at Terri and Doug’s house, going through boxes of Mom’s things.  She’d saved every card and letter she’d ever received from friends and family since she was a young woman.  There were boxes and boxes of photo albums, each one organized and labeled by dates. There were bins full of memorabilia, bits and pieces of family history, journals. I’m just like her in that way, an archivist who can’t bear to give up anything that represents the relational history of our lives.

Last summer, Chuck and I went through our own lifetime of boxes. It was part of our healing, one of the many things God used to make us a better version of ourselves. We were seeking a kind of peace and order we’d never had before and trying to save our kids from inheriting a mess. It was an overwhelming task that took months. We sifted and sorted through archives from our growing up years and our family life. We went through Art House memorabilia, music career boxes, and correspondence that spanned decades. Parts of our history were hard to revisit, and my heart got weary. But more of it felt like a privilege. I read letters from my grandmothers, and emails I’d printed and saved from Molly’s first semester away from home. I read notes from friends in grammar school, and letters from the many people who’d stayed with us in our Art House years. I remembered people I’d forgotten and sent texts to my oldest girlfriends when I found things from our childhood. I felt rich from all the people we’d known and the stories we’d been a part of. We’d lost track of some folks, but their cards and letters reminded me of their important place in our life. It’s impossible to keep the same level of intimacy with everyone you’ve ever been close to, but with some you can, you do.

You stay in touch. You keep meeting together around the table and doing the work of family traditions. You sit with a friend when they’re in trouble and go home with prayers on your lips. Every now and then you send cards and letters through the post because you know how lovely it is to open the mailbox and find something personal. You raise a glass with those you love and thank God for the gifts, however small. And you make room for imperfection, forgiveness, and grace. It’s the only way forward. 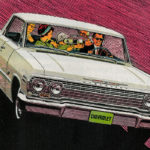 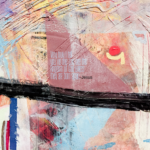 10 thoughts on “The Bonds That Carry Us”